The 9/11 Museum at Ground Zero, or National September 11 Museum, is the museum dedicated to the September 11 tragedy, located in the World Trade Center area right where the twin towers once stood.

It opened in 2014, almost 13 years after the tragedy that hit the United States and the whole world, exactly on 11 September 2001, with the terrorist attacks on the twin towers. The “people’s museum”, as defined by those who designed and developed the structure.

The Museum and Memorial is located next to the Freedom Tower, the skyscraper that has practically replaced the 2 twin towers, the iconic symbol of New York City. The museum recounts the attacks of 11/9 and the previous one dated 1993 (February 26), with the dual objective of honoring the memory of the almost 3000 total victims of the two events as well as those who risked their lives to give aid, but above all to tell, to show the world all the meanings of these tragic events, not to forget. 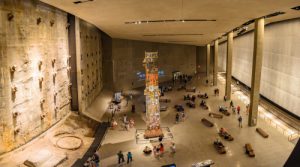 Museum covers an area of 10,000 square meters of exhibition space, which tell the story of September 11 through large multimedia screens, archives, and authentic artifacts found at the site of the attack or belonged to those who were there that day, victims of this absurd tragedy, to fight to save one’s life and/or that of others.

The museum is developed underground, right where the foundations of the twin towers once stood, so much so that some pieces of the museum are exactly parts of the 2 towers, which remained where they were. For example, you will find the remains of the escalators, through which many managed to escape. In the Foundation Hall, the main hall of the museum, you will find the “slurry wall,” an original wall of the foundations of the World Trade Center, which has remained intact, covered with mementos, memorials and posters of the missing.

Often there is confusion about correctly identifying the three places in New York dedicated to remembrance and tribute to the victims of the World Trade Center.

*** The Tribute Museum (or 9/11 Tribute Center) is located at 92 Greenwich Street. It is a small museum focusing on the experiences related by survivors and witnesses. It may even happen that they are the ones to guide the museum tours.

*** The Memorial Plaza (also called Memorial 9/11) is a free public square. Two large square-shaped tanks of about 4000 square meters each were built in the place where the towers used to be. The names of the victims have been carved on the perimeter of each fountain. The memorial is located in a beautiful park with white oak trees and among them is the Survivor Tree, the only tree that survived the destruction. Next to the Memorial Plaza is the 9/11 Memorial Museum.